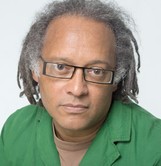 Peter Kalu is a writer and editor, based in Manchester, UK. He has nine published novels, ranging from science fiction to romantic comedy, and a number of radio and theatre plays. He was a translator of commercial French into English before joining the new writing development agency Commonword/ Cultureword, becoming their Artistic Director in 2008, and convenor of the UK National Black Writers Conference every two years.

He was a judge on the 2017 Saif Ghobash Banipal Prize for Arabic Literary Translation. See