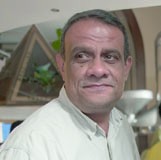 Alaa Khaled, born in 1960 in Alexandria, Egypt, studied biochemistry and went on to become a well-known son of the city as a poet, novelist and literary editor. In 1999 he founded the literary and cultural magazine Amkenah (Places) that focuses on the “poetry of place” and the relation between people and places. Alaa Khaled is well known for relentlessly ignoring the formal boundaries that are supposed to separate literary genres, creating his own style and narrative.

An interview with him about his work and ideas and a chapter from his autobiographical first novel A Pain as Light as a Bird’s Feather Floating Quietly from One Place to Another, both by Sally Gomaa, are published in Banipal 58.

He has published six collections of poetry, three books of essays and reportage, among the latter, Everything Happens Quietly With No Surprises (Alexandria, 2004) which was nominated for the Lettre Ulysses Award in 2005, and his latest work, Alexandrian Faces.