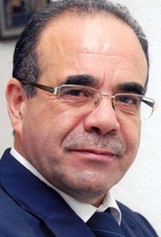 Shukri al-Mabkhout was born in Tunis in 1962. He holds a state doctorate in Literature from the Arts College of Manouba, Tunisia, and is head of the Manouba University. He is on the editorial board of several refereed journals, including the magazine published by the Institute of Arabic Literature in Tunis (Ibla) and Romano Arabica published by The Centre for Arab Studies in Bucharest, Romania.

He is the author of several works of literary criticism. The Italian is his first novel, and was shortlisted for the 2015 International Prize for Arabic Fiction (IPAF). It is excerpted in Banipal 52 – New Fiction by agreement with IPAF.