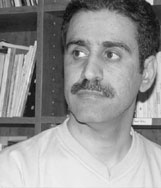 was born in Riyadh, Saudi Arabia, in 1964. He is a poet and writer. Since 1998 he has published six works – three collections of short stories, two novels and one book of essays, also three books of short stories for children, and a play, produced in theatre and on video. He works as a cultural affairs journalist in Riyadh.

His novel Traps of Scent, excerpted in Banipal, was published in full by AUC Press, and later by Penguin USA, as Wolves of the Crescent Moon.