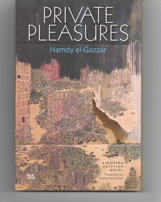 The highs and lows of intoxication

At the beginning of Private Pleasures, the novel’s first-person narrator Rabeea el-Hagg and his friend Haris walk through the “celebrated streets” of the Egyptian city of Giza. It is Thursday evening, the start of the weekend. “Behind us, Giza Square is a raucous, pullulating, raging inferno, filled to its farthest limits with lights, sounds, and shapes and crowded to overflowing with bodies, objects, and goods of every conceivable kind.”

With his vigorous language, humour and gift for narrative Hamdy el-Gazzar brings the streets and characters of Giza vividly to life in this story of a crucial few days in Rabeea’s life as he seeks escape from his situation through a cocktail of sex, drugs and drink.

Rabeea, a philosophy graduate turned radio newsreader aged around 30, is full of anxiety. For the past six months he has been enjoying a passionate and obsessive affair with married Nashwa, who had refused to divulge her husband’s name or profession. But the previous day she let slip that her husband’s name is Anwar Gabr, whom Rabeea believes is a police officer and a member of the leading family of butchers in Giza.

While trying to confirm Anwar Gabr’s identity through internet search engines Rabeea has found a harrowing video of a man of that name who, in a state of sexual excitement, whips a screaming, terrified young woman and forces her to undress. The video made Rabeea physically sick.

Beyond Rabeea’s fear of what this vicious Anwar Gabr may do to him in revenge for his affair with Nashwa, there is a wider sense of dread and imminent catastrophe. Rabeea sees a large neon-lit sign at the top of the Avowal of God’s Unity and Light Shopping Center proclaiming “O People, fear your Lord. Terrible indeed shall be the quaking of the Last Hour”. He admits: “I am lost . . . scared.”

Private Pleasures is the second published novel of Hamdy el-Gazzar, who was born in Giza in 1970 and has a philosophy degree from Cairo University. El-Gazzar was a playwright and screenwriter before making an auspicious novelistic debut in 2005 with Sihr Aswad (Dar Merit, 2005). The novel won the Young Writers’ Novel category of the prestigious Sawiris Foundation Cultural Award for Egyptian Literature. It was translated into English by Humphrey Davies and published by AUC Press in 2007 under the title Black Magic, chapters from the translation appearing in Banipal 26 (Summer 2006).

In 2009 el-Gazzar was chosen by the Beirut39 judging panel as one of 39 Arab authors aged 39 or less whose work was deemed worthy of particular attention. An extract from Davies’s translation of Private Pleasures is included in the 2010 anthology Beirut 39: New Writing from the Arab World (Bloomsbury), edited by Samuel Shimon.

El-Gazzar was a 2007 Fellow of the International Writing Program at the University of Iowa USA. He currently writes the “From Egypt” column in Sampsonia Way online magazine. His latest published book is a collection of quatrains entitled Kitab al-Sutour al-Arba’a (The Book of the Four Lines).

Ladhdhat Sirriya, the Arabic original of Private Pleasures, was published by Dar al-Dar in 2008. The English translation has been executed with supreme skill by Humphrey Davies, a long-time resident of Cairo and twice winner of the Saif Ghobash Banipal Prize for Arabic Literary Translation. The translation slips seamlessly between past and present tenses, and between different registers.

The trajectory of the elegantly structured novel traces Rabeea’s state of mind from the highs of intoxication to a “coming down” phase, during which he sleeps for three days and two nights. A “lake of memories, sounds, and pictures overflowed its banks” and “ghosts, shadows, images” of many characters from his life appear before his eyes.

From Rabeea’s memories and stories it is clear that he has had to contend with many difficulties. His deaf and dumb mother has been confined to her rusty wheelchair for a quarter of a century; at an early age he became her career. She spends her days watching an old black and white TV and knitting.

When Rabeea was in secondary school his father went to work in the Gulf for five years without once returning home, and lost contact with his family. On his return to Giza he set himself up as a Legal Counsellor and took a youngish widow as a second wife, moving into her house. Finding the presence of the widow’s daughter Afaf a hindrance to his sex life with his new wife he convinced Rabeea to marry her when he had just turned 18 and Afaf was 17. The relationship between Rabeea and Afaf has deteriorated, especially since the drowning in Alexandria of their two-year-old son, which Rabeea blamed on Afaf.

The jacket of Private Pleasures informs, or warns, the reader that the novel is “Milleresque in its treatment of sex”. The novel is packed with explicit sex scenes, with el-Gazzar breaking all taboos or restraints.

Sex is presented in a wide variety of settings. The video of the sadistic Anwar Gabr getting pleasure from whipping a woman is a reminder that the Egyptian police and security forces have sometimes connived or participated in sexual violence against women. Rabeea witnesses male gay flirtations and sex among audience members in a cinema. The tales he tells of various characters in the novel usually have a sexual element.

In Rabeea we find is a mixture of carnality and a yearning for love and the sublime. The lengthy description of his sex session with prostitute Simone in Haris’s room while high on drugs is interrupted by a chapter on the evening prayer of the nearby Mercy zawya, the loudspeaker of which is above Haris’s room. The beauty of Sheikh Hubb el-Deen’s recitation leads the worshippers to weep in their prayers “till I could hear their sobs pouring down upon me from the loudspeaker above the room”.

Rabeea is in sexual thrall to Nashwa. “It was Nashwa who’d put the rope around my neck, at our first encounter. She alone could bind and loose, she alone controlled the thick rope, which she could jerk on, pulling me to her whenever she chose. She might pull violently, dragging me in whenever she felt like it, whenever she wanted me, or let it out a little, according to her mood . . .” While Rabeea has sex with Simone, he hallucinates he is having sex with Nashwa.

Private Pleasures lives up to expectations generated by Black Magic. Those who enjoyed el-Gazzar’s first two novels will be looking forward to publication of the third, on which he is now working.

Published in Banipal 49 – A Cornucopia of Short Stories