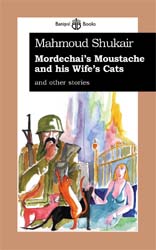 . . . with all the comic and moving strategems of the human imagination. Shukair’s gift for absurdist satire is never more telling than in the hilarious title story which turns and pulls the leg (or the moustache) of the occupation, in the classic tradition of Palestinian satire.
Judith Kazantzis

Mahmoud Shukair’s first major publication in English translation enthralls, surprises and even shocks as one of the world’s most original of storytellers excels in exposing the surreal moments in the ordinary and the mundane, the limits of human frustration and patience.

Brimming with humour that ranges from the funny and the farcical, to satire and black comedy, with a painter’s eye for colour and detail, Shukair’s stories present a unique commentary on the power of human imagination to see beyond the particular.

Mahmoud Shukair has been a prodigious creator of short stories since the mid-1960s. Born in 1941 in Jerusalem and growing up there, he studied at Damascus University and has an MA in Philosophy and Sociology (1965). He worked for many years as a teacher and journalist, was editor-in-chief of a weekly magazine, Al-Talia’a [The Vanguard] 1994-96, and then of Dafatir Thaqafiya [Cultural File] magazine 1996-2000.

He has been jailed twice by the Israeli authorities, for an overall period of nearly two years, and in 1975 was deported to Lebanon. He returned to Jerusalem in 1993 after living in Beirut, Amman and Prague.

He has authored 25 books – nine short story collections, 13 books for children, a volume of folktales, a biography of a city, and a travelogue. He has written six series for television, three plays, and countless newspaper and magazine articles. Some of his short stories have been published in French, Spanish, Korean and Chinese, as well as English.