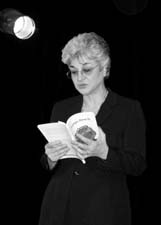 was born in Tunis in 1953, to a Tunisian father and a French mother. She has been living in Paris since 1978. She writes in French and has published eight volumes of poetry and two volumes of re-invented Tunisian folk-tales. Her poetry, as well as short stories and essays, have appeared in periodicals and anthologies, and have been translated into several languages, mainly Arabic, German, Turkish, English and Italian. In 1989 she was awarded the Jean Malrieu Prize and, in 1994, the Charles Vildrac Prize. She has translated a novel and short stories of major Philippino writer Francisco Sionil Jose from English to French. She writes in French.